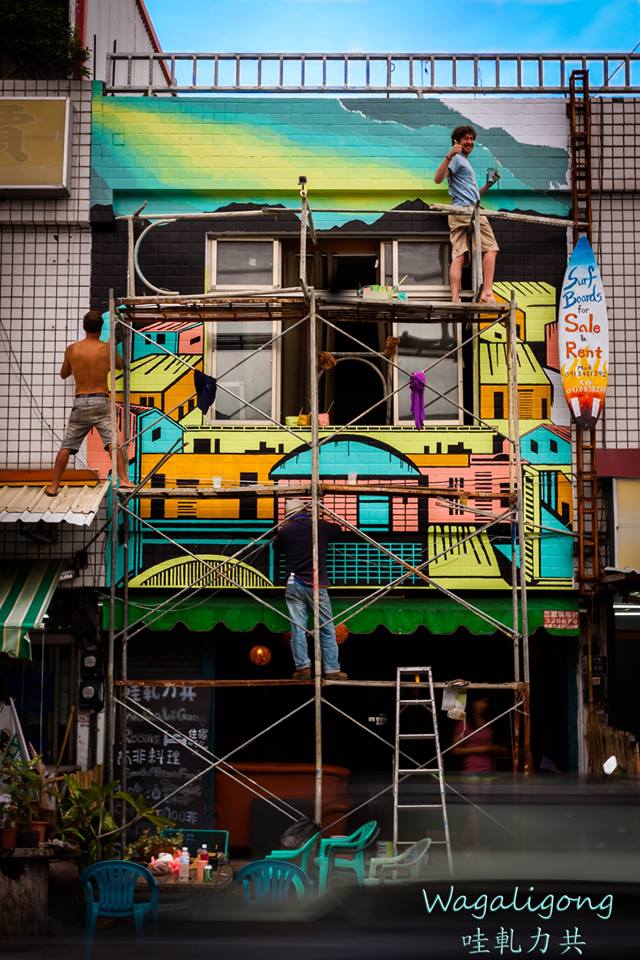 Our story - The Making of WaGaliGong

How dreams became a reality

What are we about?

Taitung..Dulan..everybody is an island and the bridge to connect us is music and art. Good things are happening here in Dulan, where we thrive on the unique mix of people, artists, music and the energy of the ocean. WaGaLiGong Surf Hostel Bar & Restaurant is waiting to show you around, feed you delicious home cooked food and provide very reasonably-priced accommodation to anyone with an open mind. Get a taste of what we are about - watch our one-minute-long film.

It took 24 months to finish

Somewhere around 2012, South African English teacher Teunus "Tienie" Wessels grew tired of throwing sticky balls in cram schools and approached fellow South African teacher Mark Jackson with the idea of throwing music festivals instead. They realized they needed a physical base first, a 'hub' from which to base their operations. Having a place, ie a building, meant they could explore a whole bunch of other options too, like pizza, surf shop, bar, etc, and so the festival idea morphed into a hotpot of other options: music, art, watersports, and great food and drinks - a place that would bring different kinds of people together. They decided to join forces and the concept of 'WaGaLiGong' was born.
But they didn't have a building yet. They visited countless potential sites but there was nothing that really 'grabbed them', except for one (kind of). Dulan 89, diagonally across from the Dulan Sugar Factory, looked like a real dump from the street. First impressions: just another concrete box with little or nothing going for it. It badly needed a paint job and the cracked floor tiles looked like an abandoned hospital from a zombie flick. There were dead rat carcasses upstairs and the rooms were filled with trash, rotting furniture and dust. Ugly rebar steel bars (or rusty prison bars?) completely blocked the second floor balcony which, facing east, ironically had the best view of fields and beautiful blue ocean. But Tienie and Mark could see through all that mess. Granted, the place was ugly as hell. But its location was, well, almost perfect. A stone's throw away from a famous landmark (and iconic nightspot), the Sugar Factory. A couple of minutes ride to the beach by car or a 15 minute walk. The walls could be repainted and the trash and dead rats removed. The small doorway separating the two main areas on the first floor could be knocked out, opening up the space and expelling the claustrophobia. The prison bars on the second floor balcony could be chopped down, opening up the view of green and blue. And then there was the rooftop. Wide and long, with beautiful views of Dulan village Dulan Mountain to the west and the Pacific Ocean to the east, high above the muffled sounds of Highway 11 below. There's something about rooftops that appeals, that grabs you. Visions of braais (BBQs) on warm summer nights, yoga classes saluting the morning sunrise, the potential of small parties, or just going up there to chill after a long surf session. Sure, there was no railing at all which meant that some unlucky bugger, desperate for a piss during a party, might stumble over the side. Two meter high clumps of construction rebar sprung skyward from the floor like steel weeds, anticipating a third floor that was never built. And the place could potentially become a sauna in summer with nothing to shade it from the relentless sun and heat. But so what? We could fix those things.
The roof was inspiring and magnificent.
The building could be reborn.
We wanted this spot.
When the landlord finally agreed to sign the final lease on Dulan 89 in November of 2012, WaGaLiGong Surf Hostel Bar & Restaurant drew its first breath, and the real work began..

These are the people behind WaGaLiGong

WaGaLiGong co-founder Tienie Wessels, aka ‘The Vortex’, is a passionate food buff and poker player….

Born and raised in Taipei, Yong-yi worked and traveled in Australia and Europe before graduating…

WaGaLiGong’s co-founder, Mark grew up skateboarding and windsurfing in an inland town. As a kid…

Tienie’s other half  and mother of two, Aya is the person crafting those delicious gourmet…

What's going on at WGLG?

AFTER THE STORM. Not a bad season for surfing, from point break lefts to beach…

Scenes From a Dream

DID HE LAND IT? It’s a common question in skate, surf and windsurf circles. Yes,…

ROAST CHICKEN POTLUCK PARTY. We were festive and feasted in WaGaLiGong with our annual Christmas…

Abus Ababa and the Wandering Singer

THE 2019 WAVE JAM PARTY! At WaGaLiGong it’s become a tradition to celebrate the end…

The Time Has Come

THE 2019 TAITUNG WAVE CLASSIC. The countdown to Wave Jam 2019 has ended! Like clockwork,…

PISSING INTO THE WIND. Making a windsurfing film is like pissing into the wind. When…

GETTING SURF-STRUCK BY A LUCKY SUMMER. Summer… a mixed bag. It could be 6 foot…

The Zombing (of Master Han Dan)

ATTENTION 緊急公告!!!: If, after watching ‘The Zombing”, you the viewer feel any strange symptoms, please contact us at WaGaLiGong and book some time away from the apocalypse.
在看完以下影片過後若身體有出現奇怪徵狀或不適者請立即聯絡哇軋力共。

HEAVEN IS MISSING 7 CHICKENS. It’s that time of a year when families & friends…

The 2018 WAVE JAM PARTY. Had a blast at last night’s Wave Jam Party at WaGaLiGong…

2018 TAITUNG WAVE CLASSIC. The war is over. Everyone has gone back to their homes,…

THE BOMBING OF MASTER HAN DAN. Taitung’s most popular Lantern Festival activity only began in…

How To Roast Eight Chickens In Two Hours

CHRISTMAS AT WAGALIGONG. Thanks to everyone who spent your Christmas with us. We are so…

TIME TO JAM! Cheers to everyone who joined our party and tried our pizzas and…

Gathering Of The Tribe!

2017 TAITUNG WAVE CLASSIC. From November 1st to 26th, the Taitung Wave Jam is back…

Return Of The Ninjas!

A SHOWCASE OF ART FROM AFRICAN AND TAIWAN. South African artist Maudie Brown, the artistic…

A WINDSURFING WAVE JAM – WAITING PERIOD: NOV 22ND TO 29TH. It started as an…

THE COLOURS AND CULTURES OF AFRICA. Maudie Brown is a South African painter known for her…

HALLOWEEN 2015! Join us for a night of magic, music and monsters at the WaGaliGong…

Is This The Ape Apocalypse?

Rocking On The Rooftops

THE RETURN OF THE ROOFTOP! ROCKING THE ROOFTOPS PARTY – AUG 29TH, 2015. 睽違兩年，哇軋力共的頂樓party回來了！這個星期六(8/29)快來跟我們一起一邊聽著Live band、跟著DJ音樂跳舞，一邊享用冰涼啤酒和美食，泡在泳池裡，再加上遼闊的美麗海景與山景，夏天尾聲最好玩的party就在哇軋力共等你來參與！不要錯過囉！After a…

Who Is Lukas Landa?

ELECTRO FOLK FROM THE HEART. Who is Lukas Landa? Where is he from? What does…

SHORT AND SWEET. Join us at WaGaLiGong on Sat the 14th of September for…