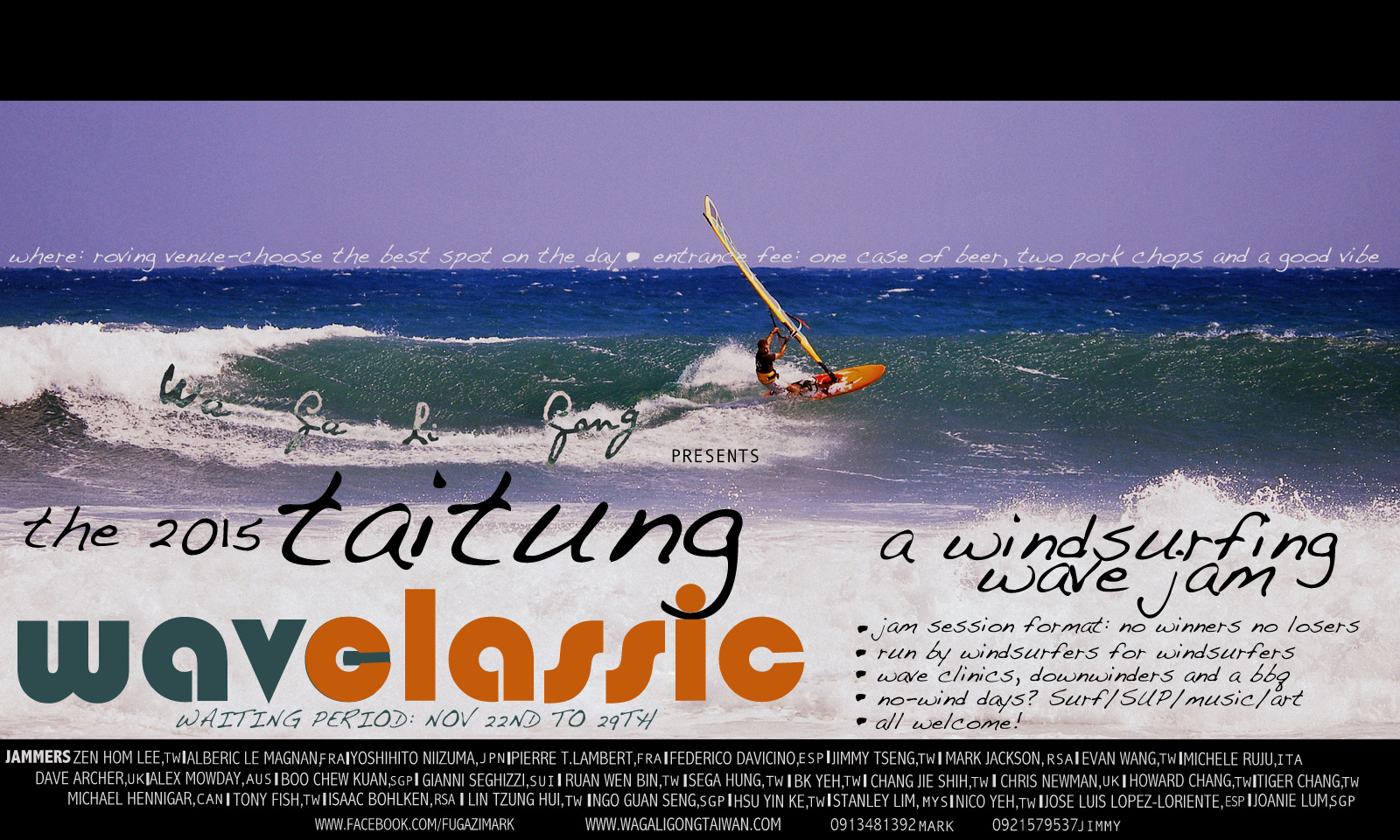 It started as an experiment. How do you get wave sailors from around Taiwan, Asia and the world to meet up in one of the best windsurfing zones on planet Earth, during the windiest month of the year? You hold a ‘wave jam‘, the antithesis of everything contest-like. No heats of 2 or 4 athletes competing while others watch – everyone gets in the water at the same time. No time limit – get in the water for as long as you like. Contest site? That’s for losers – hold it roaming venue style and you are much more likely to hit the best spot for the day. Judging and podium finishes? Who wants to be a judge at a surf/windsurfing competition anyway? Rather let people ‘jam’ together and have fun, take some pics, and have a barbecue party afterwards. And with these sound principles in mind, the Wave Jam was born.

Day 1 of the Taitung Wave Classic saw sunshine, 15 to 20 knots sideshore winds and shoulder high smooth glassy waves – perfect conditions to kick off the Taitung Wave Classic! Windsurfers from Japan, France, Singapore, Taiwan, Switzerland and South Africa rigged up their 5.0s at Bob’s Reef. The waves were super smooth and fun, running all the wave down the reef. First time jammers really got to see how well Bob’s works on the right swell and with lighter wind. 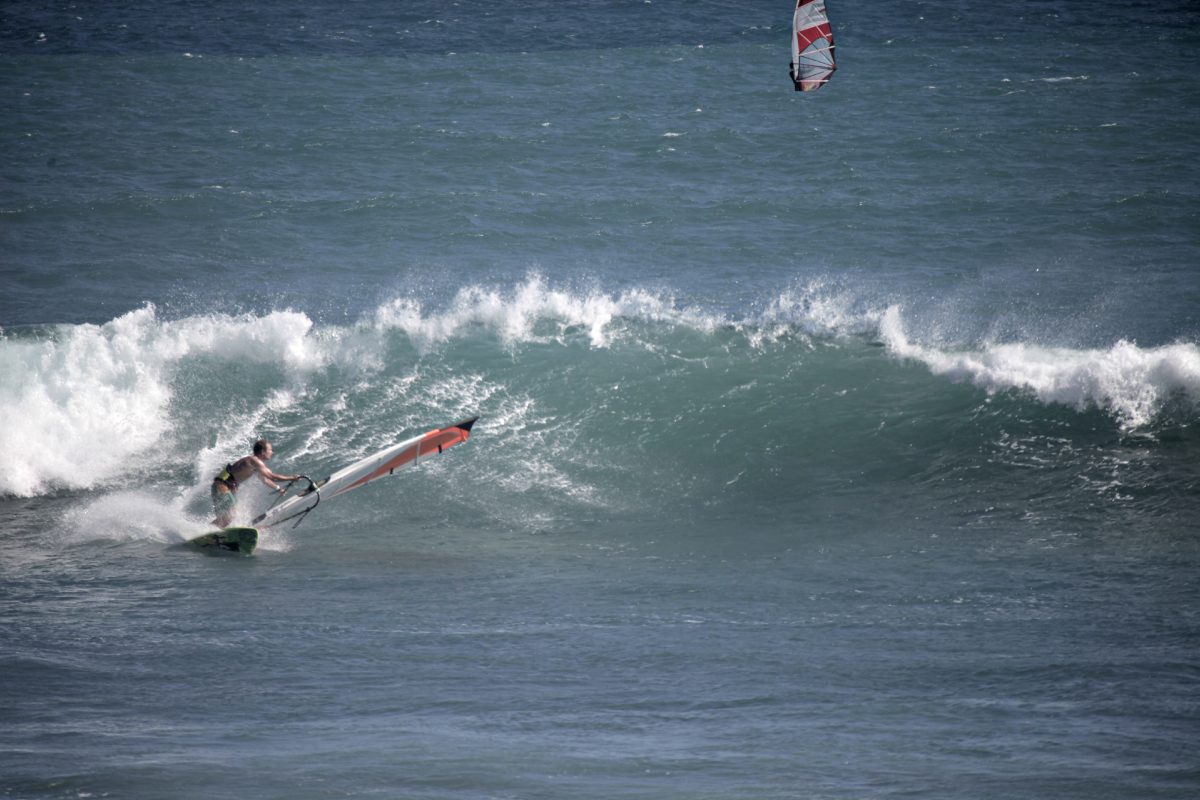 The wave jam moved to Dulan Point on the second day because it was just too big anywhere else. Overnight the waves had doubled in size, with some logo to mast high sets breaking. It was definitely not the playful conditions we had the day before. Guys were not making it out sometimes and boards, sails and bodies were scattered along the mile long beach like lost flip flops. At 3 pm, while the wind said ‘sayonara’, Teams Zen (Zen Hom Lee) and Team Penghu (Howard Chang and Kai) showed up and rushed to make the most of the dying wind. Zen donned his zen suit and charged out on with go pro mounted on head, and Howard busted out a sick backloop. Holding thumbs now for Day 3 in the Taitung Wave Classic. If the swell drops today and wind picks up Jinzun Point (leftovers) might be firing. Still waiting for Team Italiano (Michele Ruju) to show up. 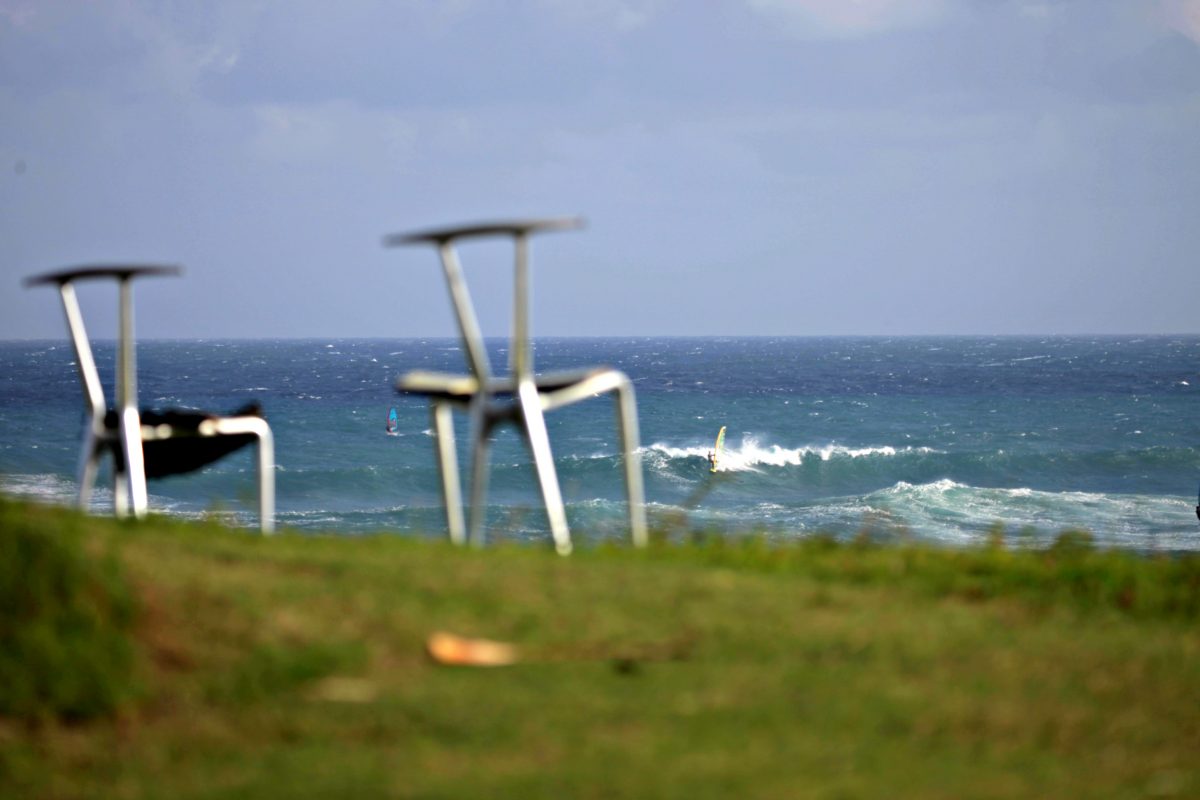 Best view in Dulan. Mark on a nugget.

CARNAGE IN JINZUN! Day 3 of the Taitung Wave Classic saw destruction and mayhem as masts, kites and humans got washed, cheese-grated and pummeled on the infamous rocky point. Team France took the heaviest casualities, with Alberic Le Magnan smashing his kite and Pierre T. Lambert doing an under water pole vault with his mast. Team Swiss Gianni Seghizzi had some nice rides until the point dished out some Swiss cheese. Teams Penghu Howard Chang) and South Africa (Mark Jackson) got washed too but managed to barely escape the rocks on several occasions. Zen Hom Lee just cruised around like a guru.Team Taiwan’s Jimmy Tseng (曾映皓)showed up late and caught wave of the day, with everyone on the shore cheering. 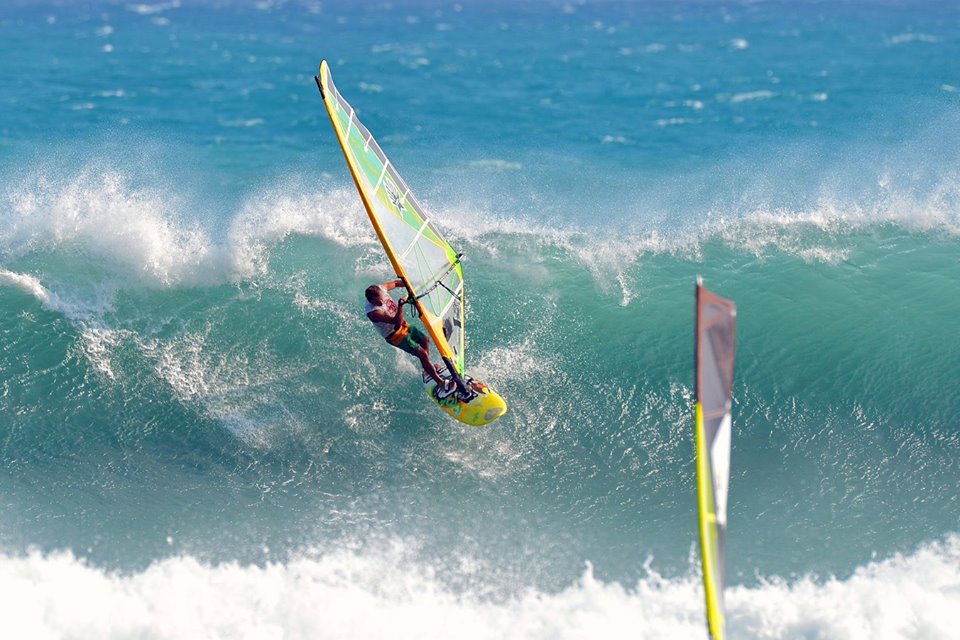 Day 4 of the Wave Classic and the venue moved to Donghe’s north side. After 3 days of sailing, most of the guys were exhausted and not that amped, especially since the waves were big and stormy, the temperature had dropped and the clouds hung low. It was like the previous 3 days we had been sailing in Hawaii and now we were in Germany. There was zero wind on the inside with overpowered conditions out back. Howard Chang, Chih-Kai Hsu and Nico Wsf, having missed the start of the Classic, didn’t seem to care and went out anyway. Nico did a few swims before finally punching out, Kai rode a wave too far south and said hello to the rocks at the river mouth, snapping his mast. Howard and Nico went wave hunting and scored some nice rides, Howard attempting a huge goiter on one section. 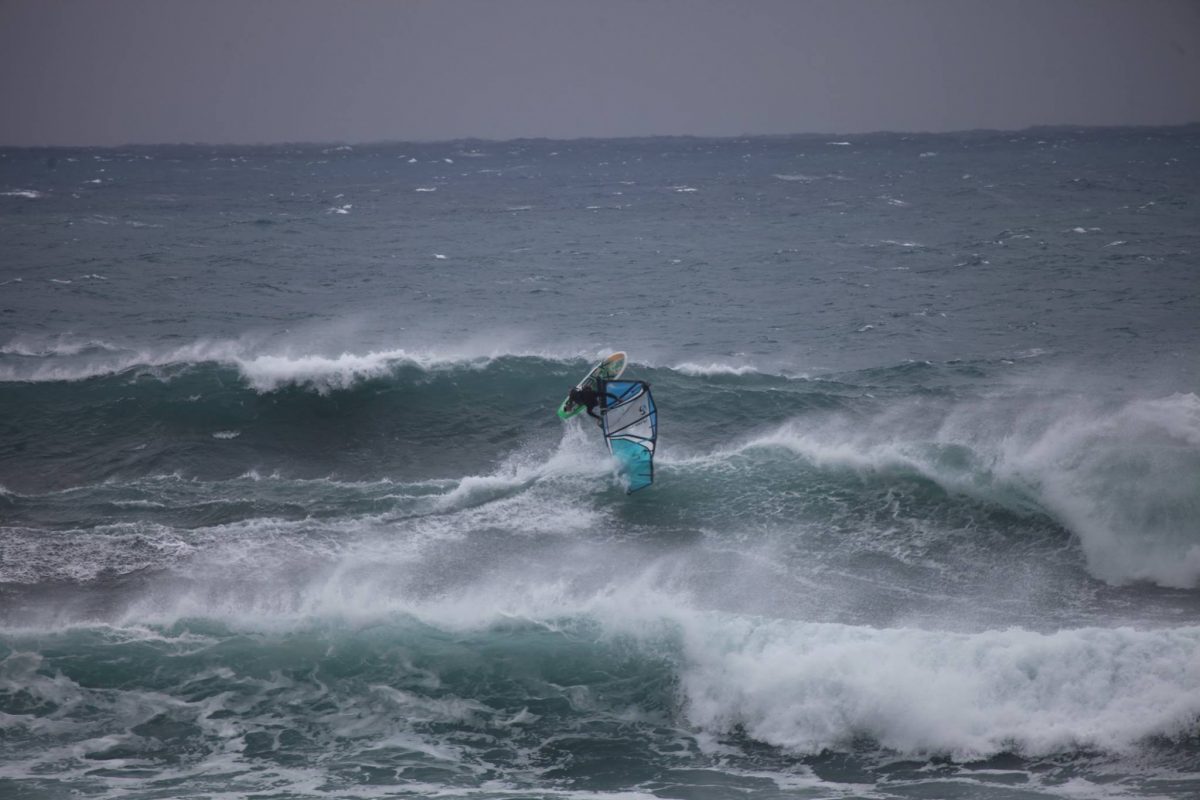 That night all the boys met at WaGaLiGong for the BBQ. Was great seeing so many windsurfers in one place, from 6 countries, all stoked about windsurfing. Hope we can do it all again next year. 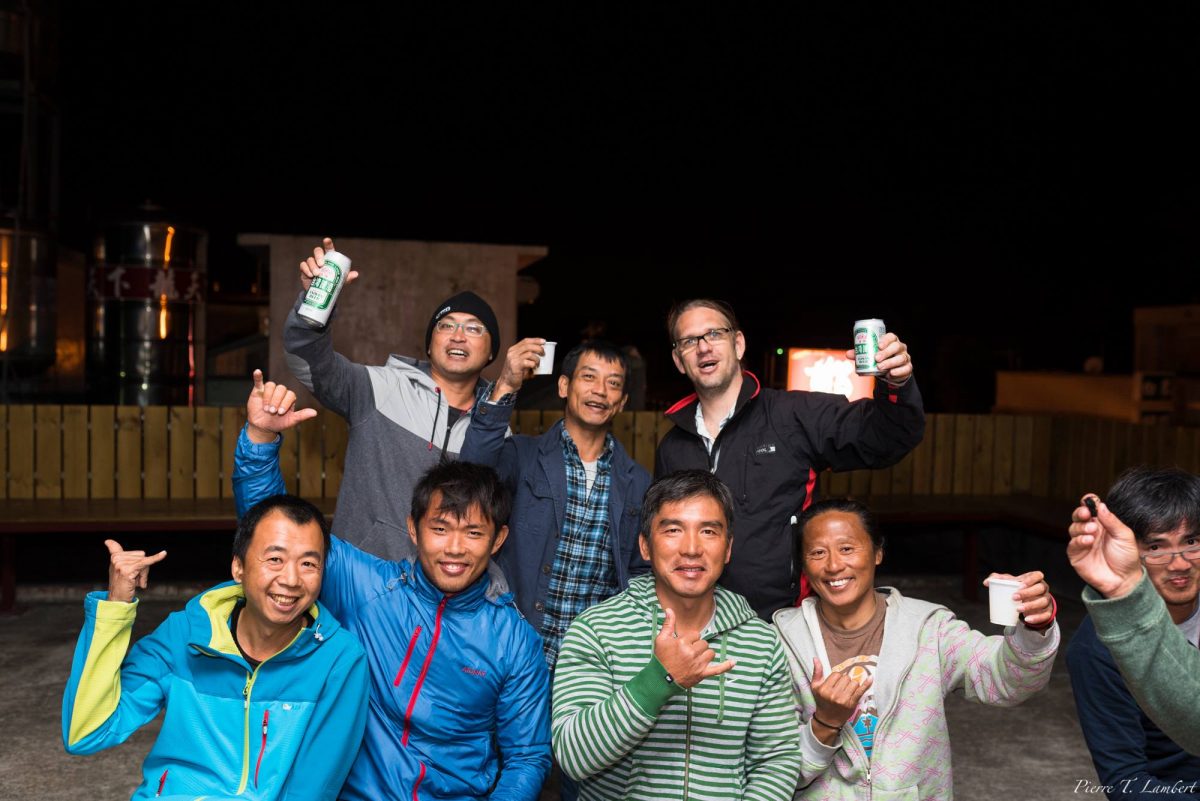